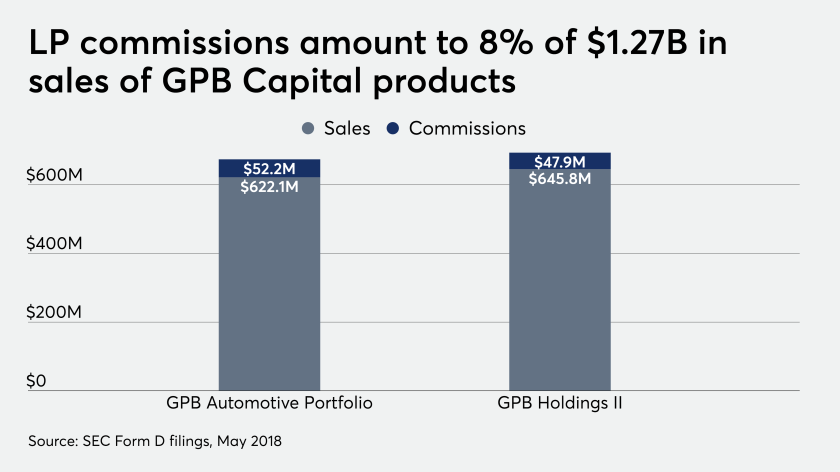 Since 2018, the SEC, FINRA, and Massachusetts securities regulators have launched investigations into GPB Capital Holdings. Additionally, the FBI and the New York City Business Integrity Commission made an unannounced visit to the GPB’s offices in 2019.

Although GPB said it is cooperating with all of the ongoing investigations by producing financial statements, target audit release dates have been missed and valuations continue to plummet.

[GPB Capital Holdings] has raised more than $1.5 billion since 2013 with a portfolio of 160 companies, many of them auto dealerships and waste management companies. Its two largest funds reaped sales of $1.27 billion — with commissions of 8% — before GPB halted investment in them last year.

Now, the 91-year-old widow from Florida and an immigrant couple from Oregon who purchased LPs issued by GPB funds have accused Madison Avenue Securities and Crystal Bay Securities of negligence and other claims in two FINRA arbitration cases.

“What they all have in common is that none of them did due diligence on this. I think we’ll be doing scores, if not hundreds, of filings ultimately in this case,” Peiffer said in an interview after filing the two arbitration claims. “I anticipate just an enormous wave of filings.”

“It appears that investors are at risk of losing all or most of their GPB investments,” says Meyer Wilson attorney Courtney Werning. “The products peddled by these companies were inherently flawed.”

In February, FINRA canceled the membership of Delray Beach, Florida-based Crystal Bay after the firm failed to pay arbitration fees, according to FINRA BrokerCheck. Efforts to reach the firm or its president and chief compliance officer, Rafael Golan, were not successful.

“Both the firm and the broker should have been shut down years ago,” says Barasch’s son Jeffrey. “They took nearly a million dollars from her and then they tried to close up shop and scatter like roaches. This should never be done to another elderly person.”

The retired couple, Alexandra and Grigory Kogan, purchased $50,000 worth of GPB automotive LPs, according to their separate claim. The Russian immigrants — one of whom is disabled — bought heavily into alternative investments, annuities and life insurance products.

“They told us those investments were ideal for us, though to this day I still have no idea what is meant by the term ‘alternative investments,’” Alexandra Kogan says. “Now we are at risk of losing everything we worked for.”

$1.5 million in retirement savings are at stake in these two claims.

Peiffer Wolf and Meyer Wilson have helped thousands of investors who have suffered substantial losses. If you have GPB or REITs in your investment portfolio, Contact Us by calling 888-390-6491 or by filling out an online Contact Form for a FREE Consultation.